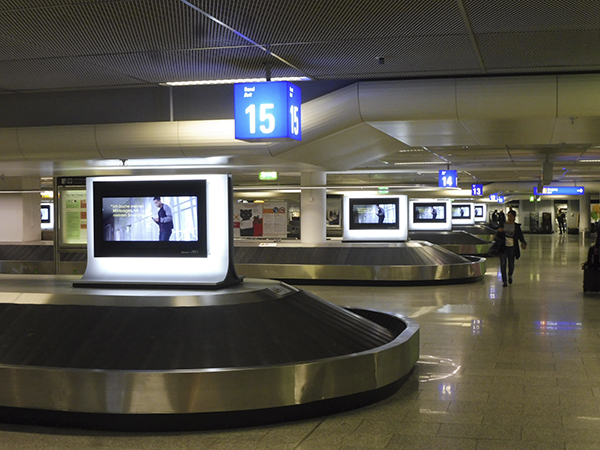 In Frankfurt is Germany's largest airport with more than 64.5 million passengers per year and in Europe, only the airports in London Paris and Amsterdam are larger than the Fraport.

With its 2 terminals and a total of 5 halls, Fraport is an airport of superlatives and many opportunities for airport advertising. In the departure areas one is bid farewell with large elongated luminous wall coloramas on each side. City light posters (CLP) on walls and between the walkways can be found mainly in the shopping areas and then there are luminous wall panels in the waiting areas. In the baggage claim area, you will find coloramas which are switched on in the same way and act on the passengers while they are waiting for their suitcases. If you go into the taxi area you will see city light posters at the waiting places. From the taxis waiting there, most of them are occupied with taxi advertising, mostly at the doors (door cover).

At the main station you will see many big banners hanging from the ceiling, in the middle above the entrance the timetable and to the left and right of the halls. There are also a few CLPs on the walls but also between the tracks. Billboard surfaces (print) can also be found there.

When you leave the main station, you stand in front of the S- and U-Bahn entrance, a few steps further on the famous Kaiserstraße and finally in the distance the skyline of Frankfurt.
When it comes to outdoor advertising in the city, columns on the pedestrian streets are the advertising media par excellence in Frankfurt. You will find them every 50m on both sides of the street if you walk along Kaiserstraße, but also further into town. 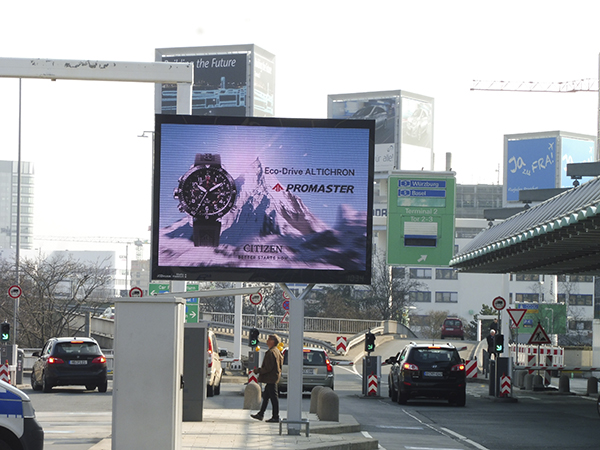 However, most advertising media can be found in the underground and railway stations. In addition to luminous and non-illuminated CLPs, large surfaces and showcases on the walls and waiting areas of the stations can be found there. In the waiting areas of the subway you will also find the in Frankfurt unique subway column advertising which surrounds the columns with various posters in A3 format.

In the busses there are rarely interior advertisements. You can sometimes find an A1 poster or a window film. These are almost invisible with the mostly overcrowded busses and therefore not ideal as an advertising medium. On the street you can see many advertisements on busses and trams. Some of the trams are full designed and most busses have advertisements on the rear.

Taxi advertising is also present in Frankfurt. In front of the main station you will find almost 50 taxis. Of the taxis waiting there, about 25% are with front door advertising, rarely both doors. There is still a lot of potential here since about ¾ of the taxis were without taxi advertising.